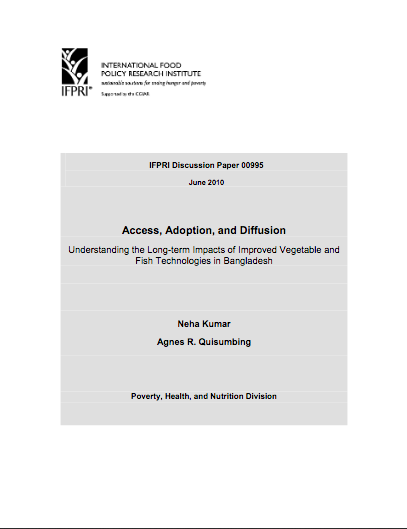 This paper assesses long-term impacts of vegetable and polyculture fish production technologies on a variety of measures of household and individual well-being in Bangladesh. In 1996-1997, households were surveyed in three sites where nongovernmental organizations and extension programs were disseminating agricultural technologies-about two to six years after the technologies were first introduced. The same households were reinterviewed in 2006-2007. Using nearest-neighbor matching to construct a statistical comparison group, we find that long-term impacts differ across agricultural technology interventions and across outcomes. Long-term impacts on household-level consumption expenditures and asset accumulation are, in general, insignificant in the improved vegetables sites, but are positive and significant in the individually operated fishponds sites. Interestingly, impacts on individual nutrient intake, nutrient adequacy, and nutritional status do not necessarily follow the pattern of household-level impacts. The improved vegetable program, despite insignificant or even negative impacts at the household level, seems to have resulted in increases in vitamin A consumption (and iron consumption for men), an increase in average weight-for-age Z-scores among children, and a reduction in the proportion of girls stunted and the proportion of boys underweight. Women in the improved vegetable program also experienced increases in body mass index. Impacts in the group-operated fishponds sites on nutrient intake are mostly negative, although we do find improvements in weight-for-age Z-scores and a decline in stunting and wasting among boys. Although one would expect significant improvements in nutritional status in the individually operated fishponds sites, impacts on nutritional status are mixed. Nutrient availability and the fraction of members consuming the recommended daily allowances have improved significantly for most nutrients considered, among men and women. Although indicators of long-term nutritional status worsen, short-term nutritional status indicators improve. The fraction of women with low hemoglobin levels also decreases significantly. We argue that the differences in long-term and short-term impacts arise from several causes: differences in dissemination and targeting mechanisms that may affect what types of households adopt and benefit from the technologies; initial existing differences between control and treatment groups (controlled for using matching methods); the degree to which a technology is divisible and easily disseminated outside the treatment group; and finally, intrahousehold allocation processes that determine how gains from the new technology are allocated among household members.