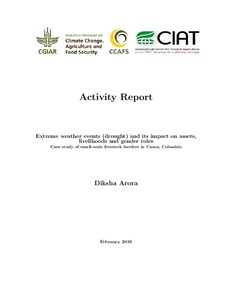 Research suggests that extreme weather events have a negative impact on agricultural
income and wellbeing of smallholder households. Climate change induced shocks can
also a ect people's ability to work, thereby, in
uence their decisions on labor or time
allocation. Very few studies have considered this impact, mainly at the economy-wide
level. There is a huge gap in the evidence of micro level impact of climate change
on time-use among agricultural households. In this paper, I analyze the impact of a
prolonged weather shock [drought] on labor allocation, primarily time-use of small-
scale livestock herders. Adopting a gender lens to the analysis, the paper examines
gender di erences in the e ects of the climate shock. The ndings suggest that
although both men and women became time poorer as a result of coping with the
e ects of the drought, women who already managed the double burden of productive
and reproductive activities became worse o .