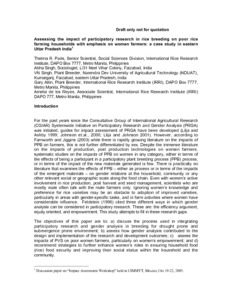 For the past years since the Consultative Group of International Agricultural Research (CGIAR) Systemwide Initiative on Participatory Research and Gender Analysis (PRGA) was initiated, guides for impact assessment of PRGA have been developed (Lilja and Ashby 1999; Johnson et.al., 2000; Lilja and Johnson 2001). However, according to Farnworth and Jiggins (2003) while there is rapidly growing literature on the impacts of PPB on farmers, this is not further differentiated by sex. Despite the immense literature on the impacts of production, post production technologies on women farmers, systematic studies on the impacts of PPB on women in any category, either in terms of the effects of being a participant in a participatory plant breeding process (PPB) process, or in terms of the impact of the new materials generated is few. There is practically no literature that examines the effects of PPB �?? either as process or in terms of the impacts of the emergent materials �?? on gender relations at the household, community or any other relevant social or geographic scale along the food chain. Even with women�??s active involvement in rice production, post harvest and seed management, scientists who are mostly male often talk with the male farmers only. Ignoring women�??s knowledge and preference for rice varieties may be an obstacle to adoption of improved varieties, particularly in areas with gender-specific tasks, and in farm activities where women have considerable influence. Feldstein (1996) cited three different ways in which gender analysis can be considered in participatory research. These are: the efficiency argument, equity oriented, and empowerment. This study attempts to fill in these research gaps. The objectives of this paper are to: a) discuss the process used in integrating participatory research and gender analysis in breeding for drought prone and submergence prone environment; b) assess how gender analysis contributed to the design and implementation of the research and development outcomes; c) assess the impacts of PVS on poor women farmers, particularly on women�??s empowerment; and d) recommend strategies to further enhance women�??s roles in ensuring household food (rice) food security and improving their social status within the household and the community