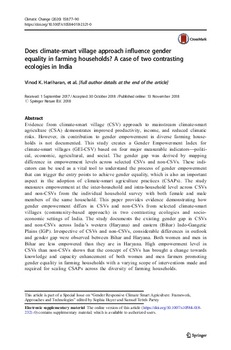 Evidence from climate-smart village (CSV) approach to mainstream climate-smart agriculture (CSA) demonstrates improved productivity, income, and reduced climatic risks. However, its contribution to gender empowerment in diverse farming households is not documented. This study creates a Gender Empowerment Index for climate-smart villages (GEI-CSV) based on four major measurable indicators�??political, economic, agricultural, and social. The gender gap was derived by mapping difference in empowerment levels across selected CSVs and non-CSVs. These indicators can be used as a vital tool to understand the process of gender empowerment that can trigger the entry points to achieve gender equality, which is also an important aspect in the adoption of climate-smart agriculture practices (CSAPs). The study measures empowerment at the inter-household and intra-household level across CSVs and non-CSVs from the individual household survey with both female and male members of the same household. This paper provides evidence demonstrating how gender empowerment differs in CSVs and non-CSVs from selected climate-smart villages (community-based approach) in two contrasting ecologies and socio-economic settings of India. The study documents the existing gender gap in CSVs and non-CSVs across India�??s western (Haryana) and eastern (Bihar) Indo-Gangetic Plains (IGP). Irrespective of CSVs and non-CSVs, considerable differences in outlook and gender gap were observed between Bihar and Haryana. Both women and men in Bihar are less empowered than they are in Haryana. High empowerment level in CSVs than non-CSVs shows that the concept of CSVs has brought a change towards knowledge and capacity enhancement of both women and men farmers promoting gender equality in farming households with a varying scope of interventions made and required for scaling CSAPs across the diversity of farming households