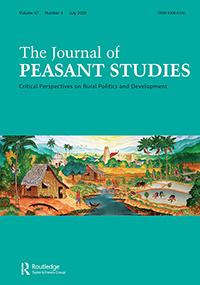 Efforts by governments in developing countries to economically empower rural women rarely focus on farming, an occupation in which the majority have experience. Those that do are typically directed at women within family farms, rather than at creating group-based alternatives outside the familial domain. In this context, two state-level initiatives in India, launched in the early 2000s, stand out, for their innovative experiment in group farming. They encouraged women to collectively cultivate leased land and become farm managers in their own right. Based on the author’s detailed quantitative and qualitative surveys in the states of Telangana and Kerala, this paper analyses whether farming in groups empowers women economically as well as socially and politically. Also, given the divergent implementation strategy of the two states, which approach is more effective and why? The lessons learnt can provide pointers for replication elsewhere.