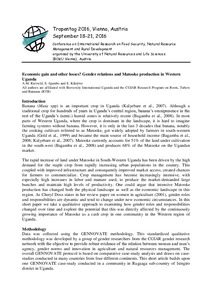 Over the past decades cooking-banana (Matooke) has become increasingly important
as food and especially as cash crop for farm households in Isingiro district in the western
region of Uganda. High urban and regional demand for Matooke and dwindling Matooke
productivity in other areas, drove expanded banana production and more intensive mana-
gement. We hypothesised that the increased focus on Matooke by households in Isingiro,
affected women and men both as individuals and as household members and affected gender
norms on what constitutes a good wife or husband. Qualitative data from one community
in Isingiro district was generated based on six in-depth Focus Group Discussions (FGDs),
eight structured individual interviews and one community profile using the GENNOVATE
method. Survey data with Matooke producers in Ishingiro (N = 51), FGDs with produ-
cers (3) and key-informant interviews (5) from a Matooke value-chain development project
(ENDURE) was used to compliment and triangulate findings. Results show that the rapid
expansion of Matooke cultivation has brought economic progress to many households and
has markedly changed the physical landscape in the area. Ownership of a Matooke planta-
tion is now among the most important criteria for determining male status and Matooke
plantations are largely controlled by men. The focus of men on Matooke has made it easier
for women to grow annual crops which increases their options of earning cash income.
Women’s access to land however is decreasing. Land is firmly in hands of men and with
increasing land scarcity, they allocate less land, less often to their wives for cultivation.
Women frequently rent land to cultivate but this is also becoming more expensive and
less available. Although women spend a lot of time working in banana plantations, sales is
exclusively controlled by men. Only women in female-headed households control sales from
Matooke plantations, also because permanent cultures such as banana are not accepted on
rented land. We conclude among others that the division of labour in Matooke production
is highly gendered. Women in male-headed households benefit from increased revenue at
household level but are limited in their options to engage in individual income-generating
activities.