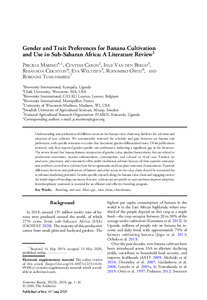 Understanding trait preferences of different actors in the banana value chain may facilitate the selection and adoption of new cultivars. We systematically reviewed the scholarly and gray literature on banana trait preferences, with specific attention to studies that document gender-differentiated traits. Of 44 publications reviewed, only four reported gender-specific trait preferences, indicating a significant gap in the literature. The review found that banana farmers, irrespective of gender, value similar characteristics that are related to production constraints, income enhancement, consumption, and cultural or ritual uses. Farmers (as producers, processors, and consumers) often prefer traditional cultivars because of their superior consumption attributes, even if new cultivars have better agronomic and host plant resistance characteristics. Potential differences between trait preferences of farmers and other actors in the value chain should be accounted for to enhance marketing potential. Gender-specific research along the banana value chain and engaging users at the initial stages of breeding can ensure that new cultivars are acceptable to users and may improve adoption. Interdisciplinary teamwork is essential for an efficient and effective breeding program.