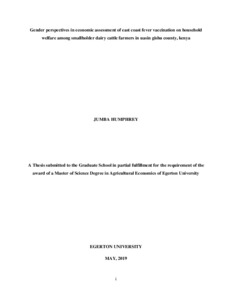 East Coast fever (ECF) is a current threat to smallholder cattle keepers in the eastern, central, and southern Africa regions; as it causes substantial economic losses. Infection and Treatment Method (ITM) is considered to be the best method for ECF control. ITM has a potential benefit of improving the livelihood of cattle keepers; through improving cattle productivity and reducing cost of production. However, since its commercialization in 2010, not all the cattle keepers in the targeted population have adopted it, and its effect on household welfare remains unclear. The study aimed at determining the perception, adoption, and impact of ITM on household welfare among smallholder male-headed (MHHs) and female-headed (FHHs) cattle keepers. The study used a multistage sampling technique to identify 448 (298 MHHs and 150 FHHs) households in Uasin-Gishu County, Kenya. Descriptive statistics were used to analyze farmers’ perception on ITM effectiveness. Average Treatment Effect (ATE) framework was used to estimate actual and potential adoption rates and determinants of adoption. Finally, Propensity Score Matching (PSM) was used to evaluate the effect of ITM adoption on household cattle income. Data were managed using STATA computer program. Results reveal a positive perception in both MHHs and FHHs, regarding reduction in mortality rate, reduction in the cost of acaricide use, increase in milk yield and boosting of animals immune system, and cattle growth among other benefits. However, the package and availability of the vaccinators were raised to be key adoption concerns. Inadequate ITM awareness among the targeted population caused significant (p≤0.1) adoption gaps of 20% and 12% among MHHs and FHHs, respectively. The ATE-probit results indicated that education level, herd-size, group membership, access to extension services, and credit access had a positive and significant effect on ITM uptake in both MHHs and FHHs. Land size and household size had significant and positive influence in FHHs only. The results further point out that uptake of ITM results in household welfare improvement; as the household annual income shifts by approximate (28% and 30%) for MHHs, and (29% to 32%) for FHHs. Therefore for livestock stakeholder to enhance livelihoods of smallholder cattle keepers through the adoption of ITM, they should make use of gender-responsive innovation platforms like social-groups where farmers can easily access extension service, credit and even gain knowledge from each other regarding ITM. Besides, the relevant stakeholders should re-package the ITM vaccine into smaller batches that are appropriate for smallholder farmers and train more vaccinators to enable smallholder farmers to easily access them.