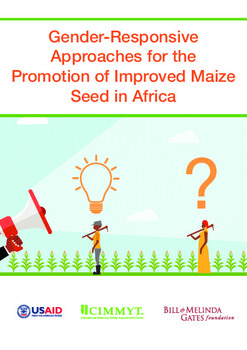 Improved maize seed is essential for African farming systems because of its relatively higher yield potential, better adaptation to common biotic and abiotic stresses such as diseases, pests, drought and low nutrients, and more efficient use of water. Some improved maize germplasm such as orange maize is bred for better nutritional content. Adoption of improved maize seed is very important in the smallholder agricultural subsector, where adoption rates for improved maize seed varieties are generally low. For instance, a recent study in five countries estimated the following rates of adoption: 28 percent in Mozambique; 48 percent in Malawi; 56 percent in Tanzania; 58 percent in Ethiopia; and 70 percent in Kenya. These statistics however, do not reveal differences in adoption intensity and adoption rates across space and demographic groups. More importantly, several studies have revealed that women farmers are less likely to use improved seed than men, leading to relatively lower productivity levels. These gender gaps represent real costs to households, seed companies, agro-dealers and society. With widespread support from donors, national governments and research institutions, the seed sector in eastern and southern Africa has rapidly evolved in ways that have greatly altered the landscape of seed delivery to smallholder farmers. As the types and volumes of improved maize seeds increase, several questions arise: How do men and women farmers learn about the performance of these new improved maize varieties compared to those that they presently grow? Which approaches are most effective in reaching different demographic groups? How can one ensure that women get opportunities to learn about and access improved maize varieties?