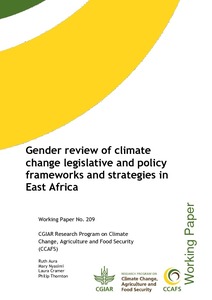 Climate change is currently acknowledged as one of the pressing global threats to the environment and humanity. This threat has moved the global community to take action on adaptation and mitigation efforts to cushion its devastating effects. Cognizance has been taken of the disproportionate impact that climate change poses to women and other vulnerable groups. The various legislative, policy and strategic frameworks on climate change available at the global and regional level is a tacit acknowledgement of the seriousness of the problem and the role of women in adaptation and mitigation strategies. For instance, through several of its decisions, the United Nations Framework Convention on Climate Change has included a focus on addressing women�??s rights and gender equality with respect to climate change mitigation and adaptation strategies. In Africa, the African Union is committed to addressing climate change issues with a gender perspective. Consequently, African countries have formulated their respective climate change policies, strategies and action plans as well as green growth and low carbon strategies aimed at integrating climate change considerations into development and sectoral plans with a gendered perspective. Kenya, Uganda, Tanzania and Ethiopia are among the East African States, which have followed suit by responding to the African Union commitments to the course by developing several legislative and policy frameworks to aid the course addressing climate change. The focus of this paper is to establish whether these frameworks are in accordance with international and regional frameworks on climate change in addressing gender-specific impacts of climate change in the areas of climate-smart agriculture, food security, water, health, human rights and security. This paper, therefore, reviews climate change related policies and strategies in East Africa through a gendered lens. The countries whose legislative and policy frameworks are in focus include: Kenya, Uganda, Tanzania and Ethiopia. The study assesses how these countries have integrated gender in their climate change legislation, policies and strategies to support the vulnerable while addressing climate change. Findings show that all four countries include gender terms within their various policies, programs and plans. All the documents reviewed indicted that they were drafted after a gender analysis on climate risks, impacts and vulnerability. Furthermore, all the documents identified gender, vulnerable groups and youth as the target groups most vulnerable to the impacts of climate change and mentioned the inclusion of gender responsive monitoring and evaluation systems. The documents also included gender mainstreaming and supported the enhancement of education, training and capacity building for women. Despite this, none of 4 the documents mention direct benefits to women and youth or budget allocations for gender specific actions. In all the policies and plans, women are identified in particular instances as being greatly involved in agriculture and food production and at the forefront of innovations and projects addressing climate change. Most of the frameworks generalised the issue of training and institutional strengthening. There is generally no capacity within existing government departments to consider gender in climate response activities. It is thus pertinent that the frameworks consider building the capacity of gender focal points in all relevant institutions to incorporate gender issues in all climate change responses. This is to ensure that institutions not only deal exclusively with gender are women and children, but that this role will also be considered in every other department