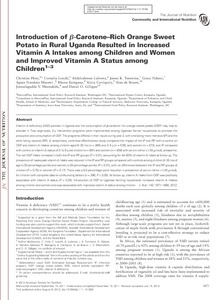 Vitamin A deficiency (VAD) persists in Uganda and the consumption of b-carotene–rich orange sweetpotato (OSP) may help to alleviate it. Two large-scale, 2-y intervention programs were implemented among Ugandan farmer households to promote the production and consumption of OSP. The programs differed in their inputs during year 2, with one being more intensive (IP) and the other being reduced (RP). A randomized, controlled effectiveness study compared the impact of the IP and RP with a control on OSP and vitamin A intakes among children aged 6–35mo (n= 265) and 3–5 y (n=578), and women (n= 573), and IP compared with control on vitamin A status of 3- to 5-y-old children (n=891) and women (n= 939) with serum retinol <1.05mmol/L at baseline. The net OSP intake increased in both the IP and RP groups (P< 0.01), accounting for 44–60% of vitamin A intake at follow-up. The prevalence of inadequate vitamin A intake was reduced in the IP and RP groups compared with controls among children 6–35 mo of age (>30 percentage points) and women (>25 percentage points) (P< 0.01), with no differences between the IP and RP groups of children (P=0.75) or women (P= 0.17). There was a 9.5 percentage point reduction in prevalence of serum retinol <1.05mmol/L for children with complete data on confounding factor s(n= 396;P< 0.05). At follow-up, vitamin A intake from OSP was positively associated with vitamin A status (P< 0.05). Introduction of OSP to Ugandan farming households increased vitamin A intakes among children and women and was associated with improved vitamin A status among children.