Z. Gebremichael, 'The role of gender in dairy value chain: The case of central Zone of Tigray', Aksum University, 2016 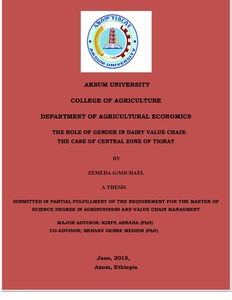 This master thesis discusses the gender roles in a dairy value at the study area central zone specifically, rural and urban Woredas of Laelay May chew and rural Adwa and Axum and urban Adwa that is four kebelle from rural /Soloda, Betehans, Sefeho, Hatsebo/ and four kebelle from urban Axum and Adwa respectively; Hawelti, Hayelom and Mebale and Hayelom. The objective of the research is to invest get the gender role at the dairy value chain in the study area and to access the decision role of both gender on the income of dairy farming and to identify the perception of both gender on the dairy farm activities. The research tried to answer some problems; the first one is to solve the information gap of the study area as there was no related study done on the gender role at dairy farm activity in the study area and the second one is to compare the result of this research finding with the finding of other researchers studied at different areas. The sample design of the research is constructed from both rural and urban dairy farmers, dairy product sellers and buyers, and dairy product consumers, from these the sample size totally 220 and from these 180 from rural and urban dairy farmers and 40 from dairy product traders�?? i.e. hotels and cafes the buy and sell milk. This research employed both qualitative and quantitative methods and the data was collected primary and secondary. The primary data were collected using four methods namely survey, key information interview, focus group discussion and method of observation. Both structured and open ended questionnaires, interview checklists and focus group discussion guides were used. The result of the research finding female and male participate at different chain activities. At the input side, purchasing of dairy cows dominated by males as 69.4% and 30.6% females participated; cleaning of dairy shade female participates 61.7%and 55% at rural and urban respectively, males 38.3% and 45% rural and urban participates respectively. Caring of dairy cow and calves also female 51% and male 49% participate; dairy animal feed collection dominated by males 58.8% and 41.2%are males; watering of dairy animal also dominated by female as56.7% and 55% at rural and urban respectively and males 43.3% and 45% rural and urban respectively. The production or breeding of dairy animal dominated by males at both study areas i.e. males 71.6% and female 28.4% were participated. At the process side or milk container cleaning, milk storage and preparation, milking and milk churning dominated by females. The transporting and selling of milk were dominated by male 55% and female 45% specifically boys and girls at rural but at urban area 55% females participate at selling of milk; butter selling dominated by females by 93.2%. The thesis also looks at how the society perceives in controlling and benefit from the dairy income and the result is women�??s have a culture and belief to control and benefit from the income. Research showed that there are some men who do not do certain activities because of the influence of culture. The thesis also looks at how gender perceives on the role of division on dairy value chain activity proves the previous perception means women engaged in lower level of dairy value chain than males. The research concluded that there is still gender participation difference in activities; women�??s are confined at lower level dairy value chain activity which is routine and daily and needs more time and in considerable activities and females dominant at input side value chain and males at production side and both genders�?? perception supports this role differences. On the other hand both husband and wife equally decide on how to use and share the income of the dairy farm and women�??s are more benefit able from the income