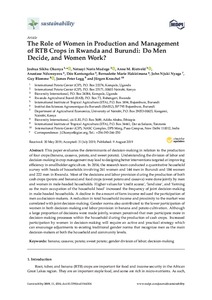 This paper evaluates the determinants of decision-making in relation to the production of four crops (banana, cassava, potato, and sweet potato). Understanding the division of labor and decision-making in crop management may lead to designing better interventions targeted at improving efficiency in smallholder agriculture. In 2014, the research team conducted a quantitative household survey with heads of households involving 261 women and 144 men in Burundi and 184 women and 222 men in Rwanda. Most of the decisions and labor provision during the production of both cash crops (potato and banana) and food crops (sweet potato and cassava) were done jointly by men and women in male-headed households. Higher values for �??credit access�??, �??land size�??, and �??farming as the main occupation of the household head�?? increased the frequency of joint decision-making in male-headed households. A decline in the amount of farm income reduced the participation of men as decision-makers. A reduction in total household income and proximity to the market was correlated with joint decision-making. Gender norms also contributed to the lower participation of women in both decision-making and labor provision in banana and potato cultivation. Although a large proportion of decisions were made jointly, women perceived that men participate more in decision-making processes within the household during the production of cash crops. Increased participation by women in decision-making will require an active and practical strategy which can encourage adjustments to existing traditional gender norms that recognize men as the main decision-makers at both the household and community levels