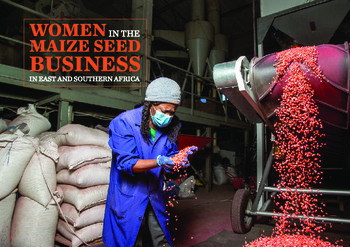 The maize seed sector in East and Southern Africa is male-dominated. Most seed companies operating in the region are owned and run by men. Often, access to land and financial capital is a constraint for women who are keen to invest in agriculture. However, there are women working in this sector who are breaking social barriers and helping to improve household food security, nutrition and livelihoods by providing jobs and improved seed varieties to farmers. The gender team within the CIMMYT Socioeconomics Program interviewed some of the women involved in the seed business in this region. Of the nine women we interviewed, only two own over 90% of the business. Most of the women profiled were playing an active leadership role in the business, spearheading key functions and overseeing the day to day operations. A report titled �??Tanzania Early Generation Seed�?? published by Alliance for a Green Revolution in Africa (AGRA) in 2016, indicates that women are poorly represented in ownership and upper level management of seed compa-nies. From the interviews, it emerged that more women are getting involved in their country�??s seed trade associations, bringing a different perspective to seed policy conversations. This report foregrounds the contributions of women in the seed business. Even though the profiles are of women in leadership positions, the publication highlights the roles that both men and women play in the seed value chain. Women are involved in land preparation, manual planting, weeding, hand pollination, manual seed sorting and packaging. Men are also involved in the business, often doing more labor-intensive tasks like loading the seed processing machines and moving large volumes of seed. They also work alongside women in land preparation, weeding, cob selection and harvesting, but they are not involved in the detail-oriented and time-consuming task of seed sorting. The seed companies featured in the report shared the unique ways in which they market their stress-tolerant maize seed in a quest to reach smallholder farmers, especially women. These include using a mobile seed store, distributing branded marketing materials like maternity ward bed sheets and khangas (wraps), and working with female lead farmers who double as seed retailers in villages where there are no agro-dealers. The companies also promote their seed in places frequented by women such as markets. The businesswomen also shared the challenges that their companies face. Limited access to finance and seed processing machinery, societal bias towards women in business, inability to attract and retain skilled workers, and delayed payments are the key challenges highlighted by the interviewees. The report also highlights the support that the seed companies have received from CIMMYT. This includes germplasm, technical support and training in seed production from the seed systems and breeding teams, and training in gender and marketing from the socioeconomics team. Some of the companies have also received small grants for the promotion of seed products through demonstration plots and for the construction of a cold room for seed storage. This work was done under the auspices of the Stress Tolerant Maize for Africa (STMA) project, funded by the Bill & Melinda Gates Foundation and USAID. The project is building on the success of previous initiatives, Drought Tolerant Maize in Africa (DTMA) and Improved Maize in African Soils (IMAS) that provided interventions to respond to challenges in the African maize seed systems