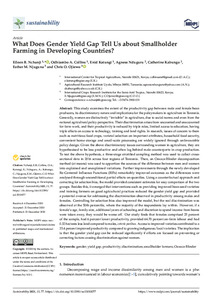 This study examines the extent of the productivity gap between male and female bean producers, its discriminatory nature and implications for the policymakers in agriculture in Tanzania. Generally, women are distinctively “invisible” in agriculture, due to social norms and even from the national agricultural policy perspective. Their discrimination arises from uncounted and unaccounted for farm work, and their productivity is reduced by triple roles, limited access to education, having triple effects on access to technology, training and land rights. In research, issues of concern to them such as nutritious food crops, varietal selection on important attributes, household food security, convenient home storage and small-scale processing are widely ignored through unfavourable policy design. Given the above discriminatory issues surrounding women in agriculture, they are hypothesised to be less productive and often lag behind male counterparts in crop production. To test the above hypothesis, a three-stage stratified sampling method was used to collect cross-sectional data in 2016 across four regions of Tanzania. Then, an Oaxaca-Blinder decomposition method (at means) was used to apportion the sources of the difference between men and women into explained and unexplained variations. Further improvements through the newly developed Re-Centered Influence Functions (RIFs) remarkably improved outcomes as the differences were analysed through unconditional partial effects on quantiles. Using a counterfactual approach and correcting for selection bias, the model provided consistent estimates for easy comparison of the two groups. Besides this, it emerged that interventions such as providing improved bean seed varieties and training farmers on good agricultural practices reduced the gender yield gap and provided a potential avenue for addressing the discrimination observed in productivity among males and females. Controlling for selection bias also improved the model, but the real discrimination was observed at the 50th percentile, where the majority of the respondents lay within. However, if a female’s age, family size, additional years of schooling and discretion to spend income from beans were taken away, they would be worse off. Our study finds that females comprised 25 percent of the sample, had 6 percent lower productivity, provided 64.70 percent on-farm labour and had 0.32 hectares less land compared to males, ceteris paribus. Access to improved varieties contributed to a 35.4 percent improved productivity compared to growing indigenous/local varieties. The implication is that the gender yield gap can be reduced significantly if efforts are focused on preventing or correcting factors causing discrimination against women