Livestock are important assets in many rural households. Within these households, differences in responsibilities, ownership and decision-making authority over livestock is often gendered. As an example, chickens may in some regions be primarily tended to by women, who have the right to sell or consume eggs, but who may not be able to decide how to use the proceeds of a chicken sale. On the other hand, men might most often make decisions about larger animals, such as cattle or camels. What’s more, if production increases and more milk, eggs or animals can be sold, women may no longer be able to control the income from these more lucrative commodities.

These gendered differences are influenced by local contexts and may vary widely across regions, but exist everywhere. This means that entry points for policy-makers or development practitioners seeking to leverage livestock for women’s empowerment vary by a multitude of factors. To guide decision-making and policies on livestock, it is important to understand these gendered differences in how women and men access, own, manage and control income from livestock.

However, most agricultural household surveys have historically focused on livestock as assets belonging to “a household”, making it difficult to use the collected data to understand and track any changes in the gendered differences relating to livestock. Even today, some seminal studies with potentially far-reaching influence still fail to collect gender-disaggregated data, hindering development of gender-responsive policies that support women and men in livestock.

We recently assessed 11 existing datasets—many very large and including numerous countries and years—focusing specifically on identifying gender-disaggregated data, including on decision-making power and division of livestock-related labor. Our analysis showed that most of the datasets contain some gender-disaggregated information, but none captured the gendered nuances of livestock assets described above. This shortcoming implies that the collected data is insufficient to meaningfully inform future policies or development efforts.

For example, the majority of the datasets were based on interviews with heads of household—almost always men—meaning the data are likely biased. Likewise, many surveys asked overly simplistic questions about livestock ownership, work or decision-making power—such as who does most of the livestock-related work. These types of questions are unlikely to detect changes to the balance of agency and power between women and men in a household, making it difficult to assess both the current state and any effects of interventions aiming to catalyze women’s empowerment.

While the availability and quality of gender-disaggregated data on livestock varied across the datasets we studied, we saw significant evidence of improvement in recent datasets. This could indicate a progressive improvement in data collection methods.

Several major initiatives have established best practices for designing questionnaires that measure women’s empowerment and capture women’s roles as owners, decision-makers and workers in agriculture, notably the Women’s Empowerment in Agriculture Index (WEAI) and the Women Empowerment in Livestock Index (WELI). Based on these methodologies, we were able to identify three recommendations on how to address gender-related shortcomings in any future household surveys.

First, designing household surveys to capture more flexible thresholds indicating progress toward empowerment—for example by providing a range of options for responses (“slightly involved”, “somewhat involved”, “very involved”)—would enable surveyors to detect small changes in the power balance over time. Tracking such small movements of the needle toward empowerment would allow for identifying promising interventions and would preempt risks of changes to the definition of empowerment motivated by a desire to document change.

Second, in several of the reviewed datasets, most answers to gender-related questions were missing. Regardless of why the questions were skipped, unexplained missing data makes it difficult to interpret the data available. We therefore recommend that future surveys include a few carefully selected questions and make sure data is collected for each of them.

Third, interviewing only “heads of households” leads to biased results, with women often being surveyed only when they have no husbands. Since women heads of household are likely different from women who are not heads of households, this makes it impossible to analyze the data for systematic differences between women and men. Several solutions to this conundrum can be proposed, including surveying both women and men or randomizing the gender of respondents.

Despite the shortcomings in the datasets we assessed, two could provide important contributions to the existing knowledge on gender and livestock.

The Rural Income Generating Activities (RIGA) dataset, from the Food and Agriculture Organization of the United Nations (FAO) comprises data from Indonesia, Pakistan and Nigeria. It employed separate questionnaires for women and men, with respondents having been interviewed by enumerators of their own gender. This creates an unusual opportunity to study gendered differences in responses.

Along the same lines, data from the Living Standards Measurement Study, from the World Bank, particularly the Tanzania and Uganda datasets, are well suited for investigating to what extent shocks to household income harm women and girls. The datasets allows for tracking individual households over time, and include geolocation data that could be linked to floods, droughts or other disasters. This makes it possible to estimate the causal effect of income shocks on women and girls—for example whether their livestock are sold first.

With such improved knowledge on how responsibilities for, ownership of and decision-making authority over livestock differ for women and men and change over time, policy-makers and development practitioners would be better placed to leverage livestock development for women’s empowerment in the future. 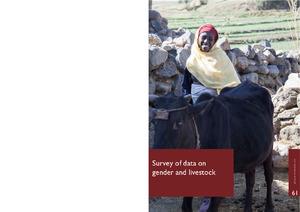 Survey of data on gender and livestock

Evolution of a gender tool: WEAI, WELI and livestock research 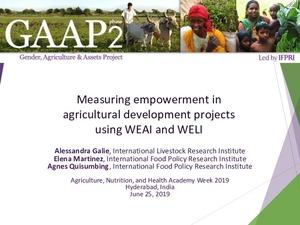 The impact of the International Livestock Research Institute