In recognition of Pi Day (Greek letter π), celebrated each March 14th (03/14), here are some pie charts to illustrate key findings on gender gaps in control over land.

This post was first published by the CGIAR Research Program on Policies, Institutions, and Markets (PIM). 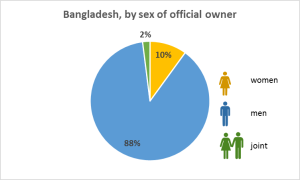 Distribution of land in Bangladesh

Some recent surveys collect information on who within households owns land, allowing us to analyze the gender gaps. 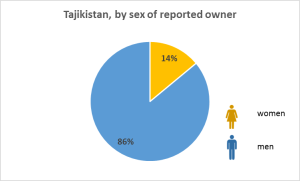 Distribution of land in Tajikistan

These data from both Asia and Africa paint a clear picture: women’s slice of the land pie (represented by the yellow portion of the pie) is much smaller than men’s (depicted in blue), although this varies greatly by country. This fact remains true regardless of whether the survey measures reported ownership, documented ownership, management, and/or land use rights, which depends on the local context. 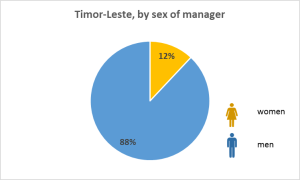 Distribution of land in Timor-Leste

But what else can these pie charts tell us? Because some of the data identify multiple plot owners and/or managers, we can identify the plots that are owned jointly by men and women. 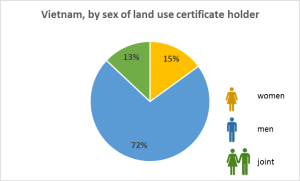 Distribution of land in Vietnam

When such data are collected, it reveals that joint landownership is quite rare in some contexts (for example, in Bangladesh), but more common in others (for example, in Ethiopia). This is most likely a result of policies in some regions of Ethiopia mandating joint titling for husbands and wives.

While joint ownership does not necessarily imply that all owners have equal rights to the land, collecting these data is an important first step towards understanding the complexities of gender gaps in land rights. Quantifying men’s and women’s existing control over land is essential not only for accurately targeting services such as agricultural extension but also for developing programs and policies to redress gender gaps. 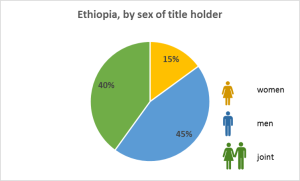 Distribution of land in Ethiopia

How might we redress these inequalities and provide men and women with more similar shares of the pie?  Increased joint ownership is one approach; this may be done through changing the marital property laws so that property acquired during marriage is jointly owned or through titling programs, such as those in Ethiopia and Vietnam, which promote joint titling. 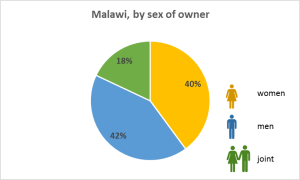 Distribution of land in Malawi

Changing inheritance laws so that daughters inherit land may also increase women’s share of the pie. And increasing women’s labor market opportunities may improve their ability to purchase land. 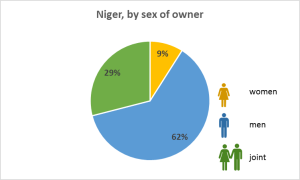 Distribution of land in Niger

But these pie charts don’t represent all land. We have only depicted land that is reported as owned or managed by someone in the household; both men and women may access land that they do not own, through kinship networks, rental markets, or through rights to collective lands. 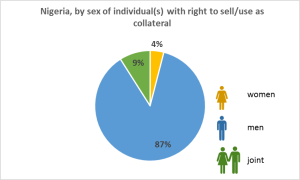 Distribution of land in Nigeria

We often think of control over land as a zero sum game. That is, since we cannot increase the amount of land available, bolstering women’s control of land must come at the expense of men’s control. Right? Not necessarily. While it is important to identify strategies to reduce gender inequalities, we should also focus on methods of increasing the size of the pie for men and women. 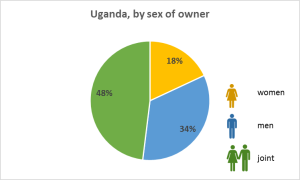 Distribution of land in Uganda

One way of accomplishing this may be through collective lands. An IFPRI Gender Seminar hosted today will highlight good practices and lessons learned on gender and collective lands. More research is needed to understand how to harness collective lands to not only increase women’s shares of the pie but also augment the size of the pie. 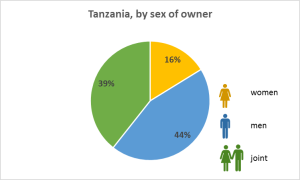 Distribution of land in Tanzania

Yield-increasing technologies such as irrigation technologies may also increase the size of the pie by making land more productive. But programs must be carefully designed and monitored to ensure that they actually narrow the gender gap. A new paper from the Gender, Assets & Agriculture Project synthesizes lessons learned from eight agricultural development projects, finding that only four projects increased women’s control of assets and only one helped reduce the gender-asset gap.

Thus, Pi Day presents an opportunity to think about some key dimensions of gender gaps in control over land – indicating women’s relatively small share of the landownership pie, highlighting the importance of joint ownership, and encouraging us to think about ways to increase the overall size of the pie.

Caitlin Kieran is a senior research assistant on gender for the CGIAR Research Research Program on Policies, Institutions, and Markets (PIM). Cheryl Doss is a senior lecturer in African Studies and Economics at Yale University and leads the strategic gender research for PIM.

This post is part of EnGendering Data, a blog on collecting and analyzing sex-disaggregated data to improve the knowledge base on the role of gender in agriculture and food security,  maintained by the CGIAR Research Program on Policies, Institutions, and Markets (PIM).