A. Woldetensaye, 'Women�??s access to and control over land in the current land administration system in two rural kebeles in Ada�??a Woreda of Oromia Region', Addis Ababa University, 2010 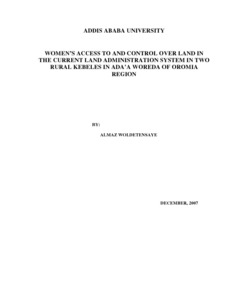 The study is designed to explore the status of rural women in access to and control over land in the current land administration system in two rural Kebeles in East Shewa Zone Ada�??a Woreda of Oromia region on smallholder farmers�?? landholding registration. The Ormia National Regional State Rural Land Administration and Use Proclamation and its implementation procedure are examined from a gender perspective in terms of ensuring rural women�??s land holding rights and control they have over land. Historical overview on the land question in Ethiopia revealed that tenure systems evolved through historical periods. Land remained under men�??s control throughout history and men�??s control over land was strengthened by the rural land reform carried out by the Derg. This tenure reform applied rural land distribution using households as unit for rural land allocation and women were disadvantaged as most rural households were headed by men. The Oromia rural land proclamation is not discriminatory on basis of sex. However, policy gaps are evident in addressing women specific issues such as issues of FHHs and women under polygamous marriages. Gaps also exist between policy and implementation. Customary laws and practices have serious impacts on women�??s land rights at the level of implementation. The research applied both quantitative and qualitative methods in view of feminist research methodology to properly address issues from a gender perspective. Survey of 318 households was conducted administering questionnaires in the quantitative method. The qualitative method applied was interviews with relevant Woreda office and Kebele LACs, focus group discussions with rural women, case stories and observation. Triangulation method is applied in data collection, data presentation and in analysis of findings. Study findings reveal that women�??s access rights to land is less equal than legally provided. This study evidences gaps between policy and implementation. Customary laws and traditional practices generally have impacts on land access rights of single/unmarried, divorced, widowed women and on access rights of women in polygamous marriages. Women�??s control over land is not efficiently addressed by the regional rural land policy. This is a significant policy drawback as women�??s equal rights on land could not be achieved without gaining control over land. The land administration system in general and the land registration process in particular has not considered women�??s participation in community activities and decision-making. Women are not represented in LACs and Sub-Committees in both Kebeles. Study findings indicate absence of autonomous institution as gap in addressing women�??s issues in the land administration system. This study also revealed loose linkages between the rural land policy and other regional legislations like the regional family law which provides women�??s equal rights on land in marriage and on its abandonment. This study forwards recommendation to address gender gaps identified to ensure women�??s equal access to and control over land in the study area. The Oromia rural land proclamation needs revision from a gender perspective to address women�??s specific issues and the land administration system should consider women�??s participation in the process, their contribution to the system as well as their equal benefits from policy outcomes