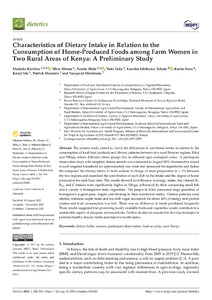 The present study aimed to clarify the differences in nutritional intake in relation to the consumption of local food products and dietary patterns between two rural Kenyan regions, Kitui and Vihiga, where different ethnic groups live in different agro-ecological zones. A participant observation study with weighted dietary records was conducted in August 2019. Enumerators stayed in each targeted household for approximately one week and measured the ingredients and dishes. We compared the dietary intake of farm women in charge of meal preparation (n = 21) between the two regions and examined the contribution of each dish to the intake and the degree of home production for each food item. The results showed no difference in energy intake, but vitamin B2, B12, and C intakes were significantly higher in Vihiga, influenced by their consuming small fish and a variety of homegrown leafy vegetables. The people in Kitui consumed large quantities of homegrown pigeon peas, largely contributing to their nutritional intake. Dietary patterns were similar; common staple foods and tea with sugar accounted for about 40% of energy and protein intakes and fruit consumption was low. There was no difference in foods purchased frequently. These results suggested that promoting locally available fruits and vegetables would contribute to a sustainable supply of adequate micronutrients. Further studies are required to develop strategies to promote healthy dietary habits and improve health status.