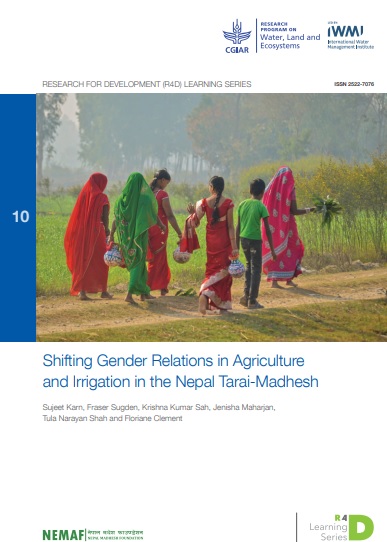 This report explores how women perceive participation and empowerment vis-a-vis access to water and other agricultural resources in the Tarai/Madhesh of Nepal. The report argues that gendered vulnerability is indeed intricately connected with other axes of difference, such as caste and economic status, despite women’s critical role in agricultural production and their active engagement in access to water and irrigation in agriculture. Overall, women’s well-being seems to have decreased as a consequence of male out-migration. However, there are women who have also become empowered in new ways, taking up enterprise opportunities.

The authors point out that at the level of policy and external development interventions, a dominating narrative on women’s limited participation in agriculture being a result of ‘social norms’ exists. Public irrigation agencies have used this myth to absolve themselves of the responsibility for ensuring gender equality in program implementation.

The report concludes that strengthening equitable irrigation user groups alongside capacity building for farmers and program implementers are critical measures for improving women’s access to irrigation and overall well-being. Women should be ensured meaningful participation, including leadership roles.