The G+ tools can help scientists in breeding programs ensure that the new crop varieties and livestock breeds they develop respond to the needs, preferences and constraints of both women and men farmers.

Even with modern genetic tools, it takes years, and a lot of money, to develop a new crop variety or livestock breed. This effort is wasted if farmers are not interested in planting the new variety, and if consumers won’t buy it. A new crop variety can be successful if plant breeders create the types of crops that people want, but that entails addressing the needs of many different users. In the end, it is farmers, processors and consumers—at least half of whom are women—who will be putting new varieties into use.

The G+ approach for gender-responsive breeding offers an integrated, systematic and evidence-based protocol for breeding new crop varieties. Developed by CGIAR scientists since 2018, it builds on work by the CGIAR Excellence in Breeding (EiB) Platform on the concept of a “product profile”, which describes the traits that women and men want in a new variety, giving plant breeders a target.

The G+ approach complements this with two additional tools: The G+ plus customer profile characterizes client groups targeted for new varieties, considering gender differences in knowledge, assets and decision-making that influence adoption. This makes it easier for breeders to develop the right product for the right customers. The G+ product profile query tool guides collection of evidence to prioritize the traits in product profiles by examining both potential positive gender impacts of those traits, but also any negative impacts they might have.

These two G+ tools enable breeding programs to meaningfully think through social inclusivity, especially women’s trait preferences, and the particular circumstances of different contexts, recognizing that one size does not fit all. In the end, breeders, farmers, food processors and consumers will benefit from understanding the traits that different people want in different crops. Varieties that farmers want to plant, that consumers want to buy, will contribute to poverty alleviation and inclusive development.

The tools were developed by the CGIAR Gender and Breeding Initiative (GBI) and are being jointly piloted with the CGIAR Excellence in Breeding Platform (EiB) on a selected set of breeding programs. More tools are planned. 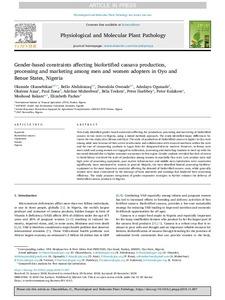